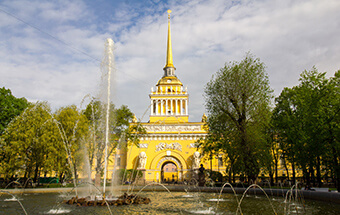 The Admiralty is the architectural and planning center of Saint-Petersburg. The first Admiralty building, erected in 1704 for the project of Peter I, was a single storey pisé building in the shape of the letter “P” surmounted by a turret. It was here that ships were built and the Russian fleet was born. Already in the 1730s, a stone building of the Admiralty was erected. The architect Korobov has kept its original form, but decorated main building of the gilded tower, the height of which reaches 72 meters. In the early 19th century, it was decided to rebuild the Admiralty to its appearance in harmony with the ceremonial center of the Russian capital. The building, designed by architect Zakharov, has survived to the present day. The grandiose building, the length of the main facade of which reaches 406 meters, consists of two U-shaped buildings. The building is decorated with a tower surrounded by a colonnade and topped with a dome with a spire. On the spire there is a weather vane in the form of a ship, which became one of the symbols of St. Petersburg. The weather vane weighing 65 kilograms is covered with two kilograms of pure gold.The Admiralty building is decorated with sculptures, images of which are associated with legends and myths about the sea. The sculptural decoration of the Admiralty tower includes the composition “Nymphs carrying the earth sphere”: 28 statues representing the four seasons, four elements, four main directions of the wind, as well as the goddess ISIS – the patroness of shipbuilding and Urania – the Muse of astronomy. Twenty-two meter high relief depicts an allegorical picture of ” the Establishment of the fleet in Russia.” It depicts the God of the seas Neptune, handing Peter I Trident-a symbol of dominion over the seas. At the corners of the Attica tower there are stone-carved statues of ancient heroes and generals: Alexander the great, Pyrrhus, Ajax and Achilles.

In 1874, the Alexander garden was laid out in front of the Admiralty building. There were busts of Russian writers Nikolai Gogol, Vasily Zhukovsky, Mikhail Lermontov, composer Mikhail Glinka, as well as a monument to the researcher of Central Asia Nikolai Przhevalsky.

Until 1844, ships were built at the Admiralty shipyard, later at different times the Naval Ministry, the naval staff, the school of ship architecture and other institutions were located on its territory.

We charge RUB 180.00 per person for registration of foreign citizens at Migration Department.

St. Petersburg is one of the most unique and beautiful cities in the world and our hotel- Petro Palace is located in its main centre.
A few steps away from our doors you will find the famous Hermitage and St. Isaac’s Cathedral, surrounded by the most famous theatres, squares, historical sights, epic bars, nightclubs and restaurants.
Petro Palace Hotel offers you all the advantages of its location, comfortable conditions for living and recreation.